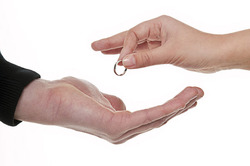 One of the reasons that Dr. Larry Lipshultz is one of the leading men's health specialists in the greater Houston area is his ability to understand the different dimensions that go into men's health decisions. In the case of vasectomy reversal, a surgery that restores a man's ability to father children, there may be strong psychological drives behind the desire to undergo the surgery. Divorce is one such issue that leads some men to contemplate reversing a vasectomy, which is why we'd like to go over this issue in a bit more detail right now.

Men May Regret Having a Vasectomy After a Divorce

A number of men undergo a vasectomy after getting married in order to prevent having another child. This is an effective option for contraception, but a number of men regret undergoing the vasectomy if their marriage ends in a divorce. These men often start relationships following the end of their previous marriage, re-marry, and want to father another child in the new marriage. Yet this is not a possibility because of the vasectomy.

Is vasectomy reversal after a divorce common?

Vasectomy reversal is relatively common following a divorce, though it can vary from person to person. A number of men do wish to father a child in another marriage, however, so undergoing a vasectomy reversal after a divorce is not out of the ordinary.

Ultimately, a divorce and a new marriage can be a major existential crossroads for a man, and regretting the initial vasectomy and considering a reversal surgery is completely understandable.

How effective is vasectomy reversal?

If a man wishes to father a child following a divorce and remarriage, there are alternatives to vasectomy reversal worth considering. The most likely alternative if a man is set on fathering a child of his own is sperm retrieval, which extracts sperm from a man's testes so that they can be used to fertilize an egg. This tends to be performed as part of the in vitro fertilization (IVF) process, and it has been quite effective in helping couples start families.

Is vasectomy reversal the ideal option for me?

If you are considering a vasectomy reversal and would like more information about the procedure and whether or not it's right for you, be sure to contact our men's health center today. Dr. Lipshultz and his team will work closely with you to ensure that you get the info you need to make well-informed decisions about men's health matters.